Teenagers and their Addiction

Today, most teens all over the world have access to the internet. Are phones the reason many teenagers increasingly prefer to stay away from people? Many teens feel uncomfortable going up to people in general. We prefer our phones and let someone else do the talking.  I interviewed four HHS students about their phone usage. When I initially asked them if they thought they were addicted to their phone they giggled and looked away, some even glancing down at their phones. About 50% of teens feel they have an addiction to their cell phones. Statistics like this allow us to see that half of the teens in America have admitted to having an addiction to electronics.

Today parents all over the world also believe their children have an addiction to their phones. The effects of their addiction worry them even though they provide the phones for them. For example, some of the people I’ve interviewed mentioned that they received a phone by the age of twelve with no adult supervision. This lack of supervision potentially gives them unlimited freedom and access to whatever their child desires. 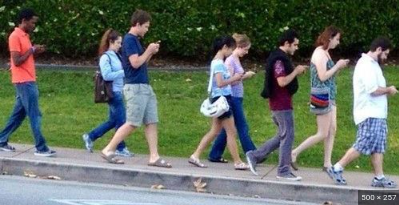 Teens rely on dopamine hits while using their phones. The more dopamine the longer time spent on their phone.  Inversely when a typical teenager does not have their phone their dopamine levels decrease. This affects their mood. Common side effects of lowered dopamine release include boredom, anxiety, and depression.  HHS Senior, Victoria Guevara, had this to say: “I can not live without my phone. I feel empty.” Victoria demonstrates how strongly many teenagers feel without their phones. One study demonstrated that the average 8-12 year old spent 4-6 hours on their screens per day.  This implies that as pre-teens hit their teen years and become more independent, they will probably use their phones even more.

Teens develop an emotional attachment to their phones causing them to feel upset when they can’t have them. Parents try to prevent this addiction from developing by being more strict with their child’s screen time.  By the time a dependency on their phones develops, teenagers are less likely to comply with their parent’s phone restrictions.

As I was interviewing the teens, they would usually giggle at the question “do you think you have an addiction,” to which they would respond “I think so.”  One HHs senior who chose to be anonymous stated: “I believe parents can have an addiction too.” 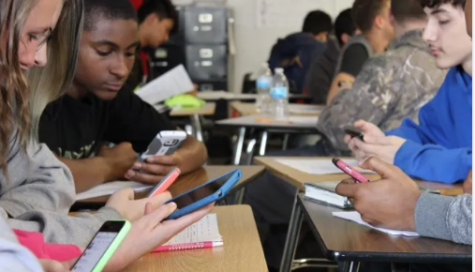 In today’s society, many teens and parents as well love to use their phones even if it isn’t for something important. I can relate to this. I too get distracted when I am trying to do my school work, justifying it as a break.

Many people don’t want electronics to be an addiction, but at some point, that is what happens. Teenager or not, somebody will always have an addiction to a screen whether they realize it or not. As we notice where we are with the screens we ourselves have to develop some type of self-control to not let the screen addiction get to us.