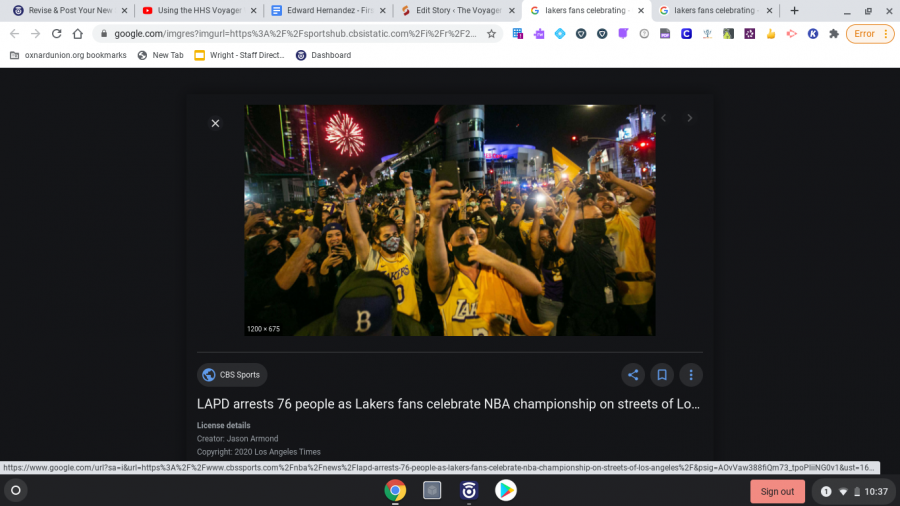 October 11, 2020 is when all the Lakers fans went crazy. They won the championship game. After their game, everyone started posting on social media to meet up at Saviers Rd with their Lakers gear and just have fun. It was like 9 P.M. when this all started. “A crowd estimated by police to comprise 400 to 500 people gathered at Saviers Road and Channel Islands Boulevard in Oxnard after the Los Angeles Lakers’ NBA championship win Sunday night and were met by riot gear-clad police officers after rocks and bottles were thrown.”

There were only 4 people hurt and no police officers were hurt. The crowds did not leave until midnight. Officers did catch a couple of drunk drivers because a lot of people were drinking during the game, and when they went to the gathering, they were pulled over. There were over 50 cop cars just strolling around trying to make things better. People were doing fireworks and crazy stuff. I feel bad for the people trying to get places with all those crowds.

In L.A., it was twice as worse than Oxnard. Over there, more people got hurt and more people got arrested. No cops were injured. This happened near the staple center. People were climbing the traffic lights and stopped all the cars trying to pass by. Some guy actually got beat up for saying something disrespectful about Kobe Bryan. There were videos of people jumping on taxis and doing other illegal stuff.