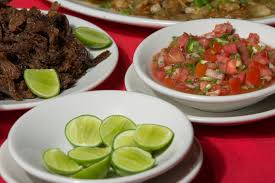 In 1517, the Europeans arrived in Mexico. The history of Mexican food is long and diverse. It is believed that authentic Mexican food might have been derived from the Mayan Indians. The Mayan Indians were traditionally nomadic hunters and gatherers. The food that the indigenous people consisted of there food was the corn and they would make it as corn tortillas.

The corn is the basis of the Mexican diet and has been for thousands of years. When they made corn tortillas they would put bean paste. The native people used peppers to make a spicy sauce and just it with corn tortillas. Other types of foods the indigenous people consisted there were tomatoes, sweet potatoes, squash, and herbs.

In 1521 Spain invaded Mexico. Spanish foods had the most influence on Mexican cuisine. They introduced new livestock, such as sheep, pigs, and cows. They brought with them dairy products, and garlic as well as many different herbs, wheat and spices.

It was at this time that the Mexican people saw the assimilation of many other cuisines including Caribbean, South American, French, West African and Portuguese. Because of this Mexican foods, today are diverse, yet dishes to vary from region to region.