History of the Stonehenge 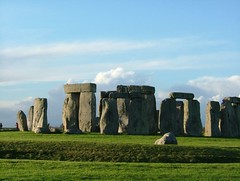 Stonehenge is perhaps the world’s most famous prehistoric monument. The earliest structures known in the immediate area are four or five pits, three of which appear to have held large pine. At this time, when much of the rest of southern England was largely covered by woodland, the chalk down land in the area of Stonehenge may have been an unusually open landscape.

In about 2500 BC, the stones were set up in the center of the monument. Two types of the stone are used at Stonehenge-the larger Saracens and the smaller ‘blue-stones’

I got my information at Pc:Info